The art of Helene B. Grossmann is one of the meditative forms of artistic contemplation. This artist`s wold vibrates, like breathing in and out: it is inspired by the energy of light, of what penetrates the barrier between art and the world of reality.
She has the ability to open up wide the natural processes of  life and then concentrat them afresh in a mighty field of gravity. Helene Grossmann opens new perspectives into the ecological area by integrating into her art the energetic phenomena of Yves Klein and the minimalist structures of the musical technologies of John Cage.
Her artistic vision is natural and organic, but the intellectual discourse does not forsake the inner dimensions of her metaphysical systems.
Vitaly V. Putsiukov
Russian Ministry of Culture

For some considerable time now I have been following the life
and  work of Helene B. Grossmann with the greatest attention
and admiration. I have been to see all her exhibitions in recent
years, in Küssnacht an der Rigi, in Basel, and most recently in Zug.

What is it that makes this  artist so important, so significant ?
Without a doubt, it is her magnificent and breathtaking depiction
of light. She has painted this light in numerous pictures : in grey,
red and above all blue Tones, in small-scale works and in very large
ones.

It is for this reason that my colleague and friend from Munich,
Raimund Thomas, rightly compares her to Seurat, Tiepolo, Turner
and Monet...I would go even further. Helene B. Grossmann succeeds,
time and again, in bringing light into her painting, making it the
dominant feature. And so we stand in front of her work, deeply moved,
constantly amazed at the force of her images.

Raimund Thomas on Helene B. Grossmann

We are accustomed to looking at pictures, but looking at
Helene B. Grossmann`s pictures is an experience of an entirely
different kind. From our first eye contact, we forget our role as viewers.
We are immediately tauchet to the soul and magically drawn into, or
rather out of, profound, gratifying and light-filled infinity.

And my soul spread
wide ist wings
and flew oèr the siland lands
as if it were flying home.

Thus wrote Joseph Freiherr von Eichendorff (1788-1857) in his poem
"Mondnacht"("Moonlit Night"). He  had doubtless also seen such pictures
in his mind`s eye. But if as  the viewer I  return to reality, I see clouds,
perhaps water and mist, and in all cases the Impression of a landscape,
which however immediately turns back into a basic manifestation, both
figuratively and literally.

What repeatedly and  increasingly captivates me is the central light,
partly concentrated and dazzling, partly diffuse and translucent.
Incredibly, Helene B. Grossmann actually manages to paint light,
this incomprehensible fluid that is so volatile and yet so powerful
and impossible to materialise. Light ! What a subject ! It is not the light
of Rembrandt or Georges de la Tour. The light here is not lamplight
but the ultimate essence in its profound being. Seurat came close to
it in his black-and-white drawings, and it was fascinatingly achieved
by just a few really great European painters such as Tiepolo, Turner
and Monet.

How many painters have struggled since the start of the  twentieth
century to represent pure colour without the strait-jacket of form ?
I do not know anyone who has attempted to convey the much more
volatile and  distant medium of light to viewers, or, as I suggested
at the beginning,to draw them into it and to illuminate them.
That is possible only againstthe background of an intuitive show,
an honest modesty, an eruptive force and a mature ability. 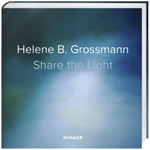 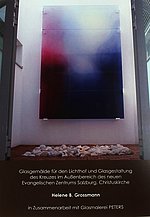 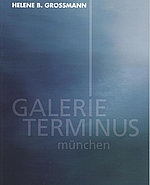 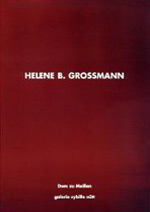 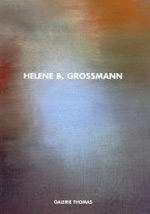 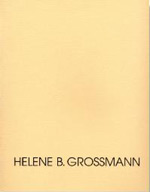 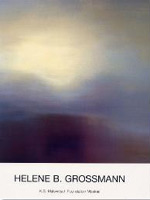 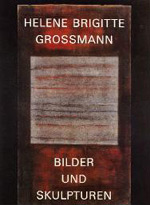